A RIP IN HEAVEN by Jeanine Cummings 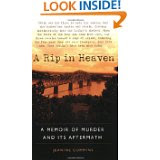 This is a sad story about the murder and rape of two young adult women and the assault of their young adult male cousin. This story took place in St. Louis, MO. The crime was commited on the chain of rocks bridge.
The name of the victims were Robin and Julie Kelly and Tom Cummings. The story makes it very clear that the author is giving notary to the victims, and playing down notariety of the perpetrators. For this applaude her. Too often I believe the prepetrator of such crimes get too much notariety. And the victim is often lost or forgotten. Ms. Cummings does a very good job of bringing the life of Robin and Julie to the surface and showing the good, kind loving women they were and what a loss their death was.
Posted by Sandy at 6:54 AM No comments:

Once again I have diverted from true crime here. I have to say I loved this book. This book was so thought provoing and gave me a possitive way of looking at other people around me. The story itself was funny, sad, heart wrenching at time.
Posted by Sandy at 11:44 AM No comments: 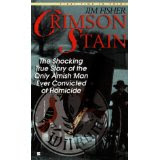 This crime took place in Mill Village, Pennsylvania on March 18, 1993. A young Amish man by the name of Edward Gingerich killed his wife by stomping her brains out. After she was dead he cut her stomache open with a kitchen steak knife, and removed all her organs, placing them on the floor beside her. He did this while two of his children, Mary and Enos, looked on in horror.

Ed had suffered with mentle problems for several year. He was found guilty of involentary manslaughter but mentally ill. He was housed in the mental health unit for a minimum term of two and one- half years, and a maximum of 5 years.

His wife Katie was "A backbencher in life, second fiddle in death. It went like this: Forgive Ed, forget Katie."
Posted by Sandy at 5:34 PM No comments: 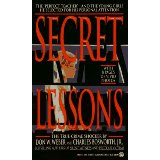 This case is about Richard Van Hook who lived in Caseyville, IL. He was a sixth grade school teacher. He was married to a registered nurse and had two children.

For years in the 70s and 80s he sexually abused his female students. In January of 1982 the story found its way to authorities that FINALLY believed something was very wrong with this star teacher.

His victims ranged in age from 11 -13. No one believed them if they tried to tell their story. Until it finally found it's way to the right authority figure.

Van Hook's jury found him guilty, but before they sentenced him, he commited suicide.
Posted by Sandy at 2:30 PM No comments:

Ed Gein is the original Psycho.

It would be hard to believe this soft spoken, mild mannered man could be capable of the unbelievable behaviour described in this book. How could anyone want to ROB GRAVES??

Then it got to the point where Ed murdered and butchered middle aged women to feed his perversions.

He didn't even make a good attempt of covering up his crime. Was he insane? Read this bazar tell to find out the answer.
Posted by Sandy at 8:34 AM No comments: